Genesis of the Programme

Human Genetics is the study of the transmittance of genes through generations. Alterations in the genome may result into mutations, a fraction of which may lead to disease phenotype. Genetic diseases can be monogenic, chromosomal or multifactorial and are passed down from the parents to the progeny via different inheritance patterns, such as autosomal recessive, X-linked recessive and autosomal dominant.

With a large population size, high birth rate, and consanguineous marriage being favoured in some communities, there is a relatively high prevalence of genetic disorders in India. In this context, the Department’s R&D program on Human Genetics, Genome Analysis and Precision Medicine seeks to address the burden of such diseases via understanding the mutation spectrum of diseases having a genetic basis, developing cost-effective diagnostic methods for genetic diseases, implementing prenatal and newborn screening programs, developing personalized medicines regimens and development of affordable therapies for these diseases.

With an aim to address the burden of inherited disorders, the Department launched the DBT- Unique Methods of Management of Inherited Disorders (UMMID) initiative. In the first phase of the UMMID initiative, the Department has supported: 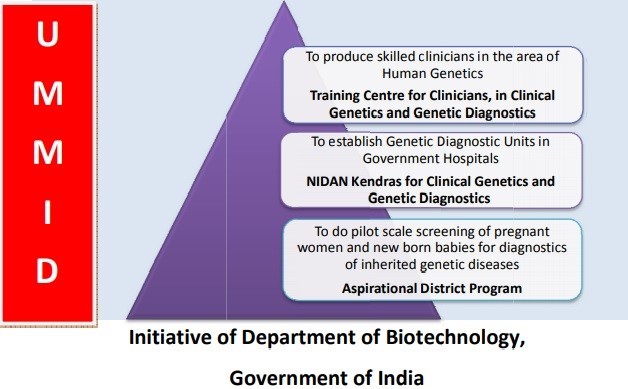 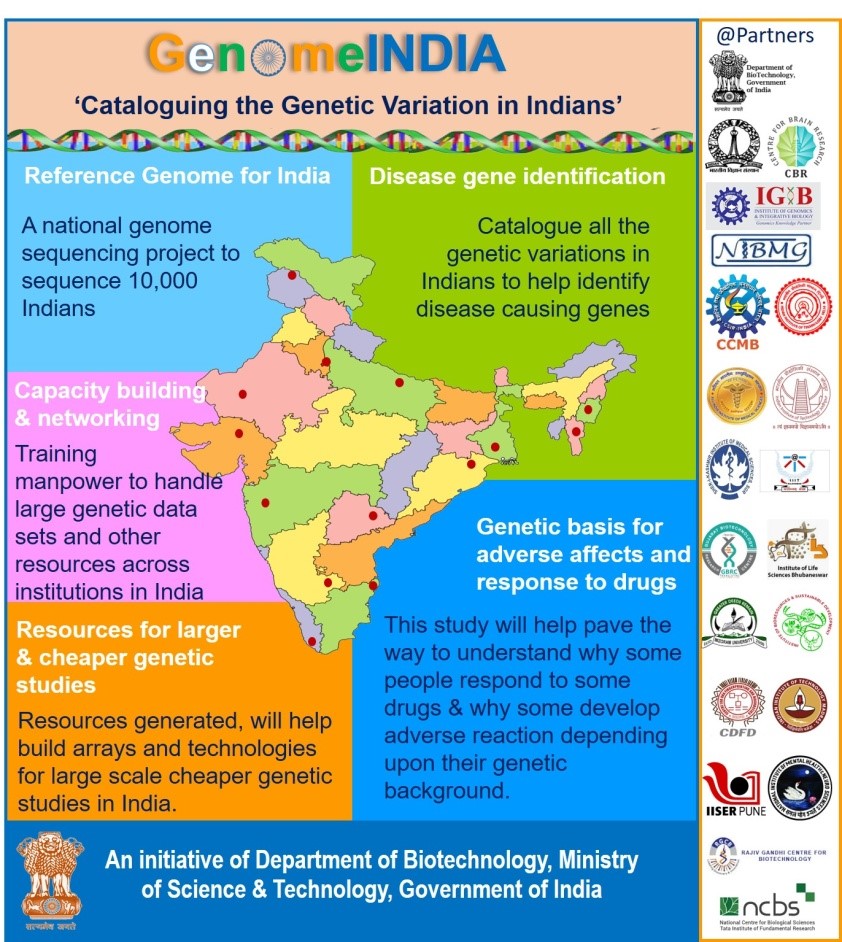 Health and disease outcomes are determined by interactions between the genome and the environment. An important component of the “environment” in the context of human health is the human microbiota which impacts host physiology and development. Factors such as host genetics, diet, geography and ethnicity, contribute in shaping the microbiome. The “Human Microbiome Initiative of select endogamous populations of India” aims at comprehensive characterization of human-associated microbes in carefully selected endogamous population groups with diverse dietary habits including key tribal populations which are not much influenced by modern lifestyle. The study is investigating the influence of diet, lifestyle, geography and age on gut microbiome using targeted metagenomic and whole metagenomic approaches. The study would also attempt to find the association between microbial enterotypes and three distinct Ayurvedic Prakriti types. Moreover, since the subjects for this study are a subset of those whose genome would be sequenced as a part of the “GenomeIndia” initiative, this study would provide important insights into genotype-microbiome associations and would help in generating a holistic account of the intrinsic and extrinsic factors determining health and disease outcomes in humans.

Monogenic disorders caused by mutations in a single gene are an important cause of fetal loss, preterm birth and neonatal mortality. Besides, it also contributes to childhood and adult morbidity along with considerable repercussion on the mothers and their families. The birth prevalence of monogenic disorders varies due to social, racial, economic and ecological influences. In order to reduce the burden of monogenic disorders (metabolic disorders, endocrine disorders, hemoglobin disorders and others), it is pertinent to understand the epidemiology and molecular basis of these disorders. With this aim, Department of Biotechnology initiated a program on monogenic disorders with a special focus on consortia-based R&D projects aiming to study diseases particularly prevalent in specific regions of the country.

The Department has formed a research platform and a National Genomics Core has been created to catalyse and facilitate genomics-driven discoveries and applications. The Genomics Core is accessible to all academic institutions and the industry for their own research and development. The Genomics Core houses and provides access to high-end genomics, computational and other relevant platforms to catalyse discoveries in all domains of biology. The ease of access to these platforms alleviates the challenges faced by researchers across the country to generate and analyse genomics data. The Central Core has been setup at NIBMG, Kalyani, with two regional cores at CDFD Hyderabad, and Allahabad University, Prayagraj.